Home » About Us » Our Patron & Ambassador 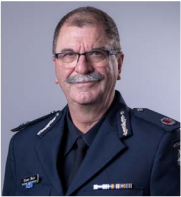 Glenn joined Victoria Police in 1981 as a Police Cadet, after graduating from the Academy he served in the inner suburbs of Melbourne, mainly in uniform general duties. In 1990 Glenn was promoted to the rank of Sergeant performing general duties and specialist supervison roles before promotion to Senior Sergeant in 2000.

Glenn performed a training role before moving to station command of Frankston Police Station. He then performed several secondments at Inspector rank. In 2006 Glenn had a lead role in the largest police operation ever conducted in Victoria, the Melbourne 2006 Commonwealth Games, as Deputy Commander for policing operations in the Public Domain. After performing an assignment as a member of a corporate project team Glenn was promoted to Inspector in 2006.

In 2010 Glenn was appointed as the Local Area Commander in the Bass Coast Police Service Area in South-East Victoria. Whilst at Bass Coast he had command of several international events such as the Australian Moto GP and World Super Bike events.In 2012 he was promoted to Superintendent and worked as the Divisional Commander for the Brimbank Division of Victoria Police’s North West Metro Region in Melbourne’s western suburbs until November 2015 when he transferred to take command of the Frankston-Mornington Peninsula Division.

In the 2020 Queens Birthday Honours Glenn was awarded the Australian Police Medal (APM). The award noted Glenn has provided outstanding police service to the community.

The citation for the APM noted Glenn encourages staff to build working relationships and connect with partners to address all issues within the communities, and reduce crime. His top priority is people and ensuring a safe, respectful and fair workplace for all members of Victoria Police.Glenn is also the Victoria Police Drug Portfolio holder.Glenn holds a Graduate Certificate in Advanced Management and a Graduate Diploma of Leadership and Management (Policing)

Glenn is married and has two children, he has a long history of community and sporting club service and currently sits on the board of the Advisory Board of the Monash University Addiction Research Centre. 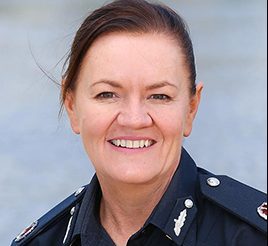 Libby Murphy newly appointed Chief Operations Officer at Ambulance Victoria has accepted our invitation to become the Inaugural Fit to Drive Ambassador! This follows on from being our supportive Patron for over 18 months.

With over thirty-two years in the Police Force, Libby has a wealth of experience. Well known for her position as Assistant Commissioner – Road Policing Command; Libby was the first female in this role.  Libby has worked as an investigator, supervisor and manager across rural and metropolitan regions in the Victorian Police Force.

At the commencement of COVID-19, she and her team developed the operating model for the management of vehicle checkpoints across the State of Victoria to maintain the safety of our borders.

Libby has been acknowledged for her hard work and efforts with multiple awards: the Victoria Police Service Medal, the Australian Police Medal (2020), the National Emergency Medal awarded for her service during the 2009 Black Saturday Bushfires, the National Police Service Medal and the National Medal. She was also identified by the Institute of Public Administration Australia in an Established Leader category awards (Victoria) as one of the Top 50 women in the public sector. This is awarded to women in public service who have demonstrated positive and proactive leadership.

Libby’s love of learning has continued with qualifications and studies in Frontline Management, Criminal Justice Administration and Executive Strategy while serving in the Police Force; as well as through her own professional development in leadership, media training, interviews and other specialist policing courses including detective training, sexual assault investigation, arson investigation, drug investigation and prosecutions.

In many ways, Libby has made it not only her career but her life’s mission to keep people safe, protect the vulnerable and engage with diverse communities and cultures. This mirrors the mission and goals of the Fit to Drive Foundation in contributing to the delivery of the Victorian Road Safety Strategy with particular focus on vulnerable and unprotected road users. This reflects the Foundation’s ultimate vision of young lives free from road trauma.

We are honoured to have Libby as our Ambassador and excited to have her joining Fit to Drive as a Road Safety Partner along with Road Safety Victoria, TAC, Department of Transport, Victoria Police and Fire Rescue Victoria.